1. What is a normal working day for you? What does your daily routine look like?

I think it’s better to look at my weekly routine, which looks like this: on average, I’m here in Neutraubling for about two days a week. Three days a week, often including the weekend as well, I will be travelling somewhere abroad and meeting up with clients. I take a passionately proactive part in all major negotiations. When new orders are being negotiated, for instance, in contractual talks such as warranty-related discussions, dealing with complaints or conducting final negotiations. If any disputes arise, it’s my job to smooth things over.

The two days I’m here in Neutraubling are always filled with action. There’s lots of administrative stuff to do, of course, like planning or human resources – everything has to be done within a relatively short timeframe.

2. How can you “switch off”, without having to think about the huge responsibilities you have?

I think the reason why this works so well here in sales, and indeed in Krones AG as a whole, is that we can count on the backing of a good, supportively bonded team. That’s the most reassuring thing about it. You know you don’t have just fellow-employees, you have comrades, you have partners, to assist you in meeting and mastering the challenges of the daily workload. This helps to reduce the pressure of your responsibilities. It’s good to know the team has my back. It’s not a one-man show, we’re a real team.

3. What goals have you had and do you still have in your career and in life quite generally?

First and foremost, I want to be a happy, satisfied person. That’s the main goal I have. And I’ve learnt that now and then you should take a look at the past and be satisfied with all that you’ve achieved and what opportunities life has granted you.

The paramount goal is to make sure that the Krones company, its staff have an up-to-the-future enterprise here well equipped to survive and prosper. That we can pass on to the next generation what we inherited from the previous one. This is something I care deeply about.

4. What’s your favourite machine from Krones?

I don’t really have a favourite machine. After all, what we’re selling to our clients is no longer just a machine. A machine is a function. But we’re not selling only a machine as such, we’re selling complete solutions. And that’s why what I like best is not any particular machine, but a solution that works properly. What I really like best of all is a turnkey brewery – I’m a definite fan of these, and perhaps one day we’ll be selling turnkey dairy plants as well.

5. Have trade fairs become “routine” for you, or is every single fair still something special?

No, a trade fair is most definitely not routine. Fairs are important, for presenting information, of course and showcasing what’s happening at Krones. That’s one aspect. As far as Krones is concerned, though, trade fairs have taken on an additional dimension: as vehicles for communication. At the fair in Nuremberg, especially, this role as a communicatory event is particularly evident. People meet up with each other here and make full use of the platform. There’s always something going on at the fair, it’s buzzing with vibrancy. You’re always optimally energised – it’s great – the day has 24 hours there. I hope that this excitement will one day rub off on you!

I don’t really have a favourite exhibit. What I like best about fairs is the clients, that they’ve come to us and feel they’re in good hands. That’s the most important thing I need for a fair. Quite often some fun things happen at the fair in Nuremberg: as you know, there are a whole lot of small breweries in Bavaria. So it can easily come to pass that an 85-year-old brewery owner arrives at the fair and buys a labeller. And when he woke up that morning he didn’t know that later that day he would be buying a labeller.

So at a fair, not least at the one in Nuremberg, you get spontaneous purchasers, spontaneous decisions. That’s why it’s important that here, we offer a platform to all these small breweries.

7. What expectations do you have for the BrauBeviale 2014?

The Brau is very largely a beer-themed fair, you know. Beer has been experiencing a major renaissance overall, though this is not quite as evident in Germany itself. Significantly more beer is being drunk again. Beer has become much more attractive. You see this in America, particularly, where there is an abundance of craft brewers. Every year, we sell almost 21 units for small craft brewers in America!

A never-ending series of new tastes and new colours – this is a vibrant sector. It’s no longer always the same beer that our grandfathers drank way back when. Beer has taken on a new lease of life. In many countries, particularly in America or Spain, I notice that there’s a new, youthful beer culture.

These are people of your age, discovering the new beers and the new flavours. Beer brewing is a craft, not just an industry. And now the new-style brewers are coming, introducing more and more new flavourings.

What I expect from the Brau is that the spark of this beer culture, which is already proving highly fertile abroad, and this new vibrancy, will arrive in Bavaria. And perhaps the fair will help the Bavarian brewers learn a bit from this. For us in turn, the advantage would be that more machines will be sold.

8. Does Krones have a definite advantage over its competitors, and if so, what precisely is our strength?

Yes, we most certainly have. Not least due to the fact that Krones operates as a complete-job, solution-driven vendor. I don’t have to sell just a labeller, I can offer a client, a brewer, for example, an all-inclusive package: from accepting the cereal, the malt, then the water treatment, the process and the bottling line all the way through to the logistics – and then on top of all that the appropriate software.

When a client comes along and needs a bucket of glue, then he’ll get it from us. And when the client says he needs a new brewery, he’ll get that too – as a turnkey job. So our advantage is, of course, that we are able to cover a client’s entire spectrum of needs. From glue and labels all the way through to a turnkey brewery – anything a client needs, he can buy from us. 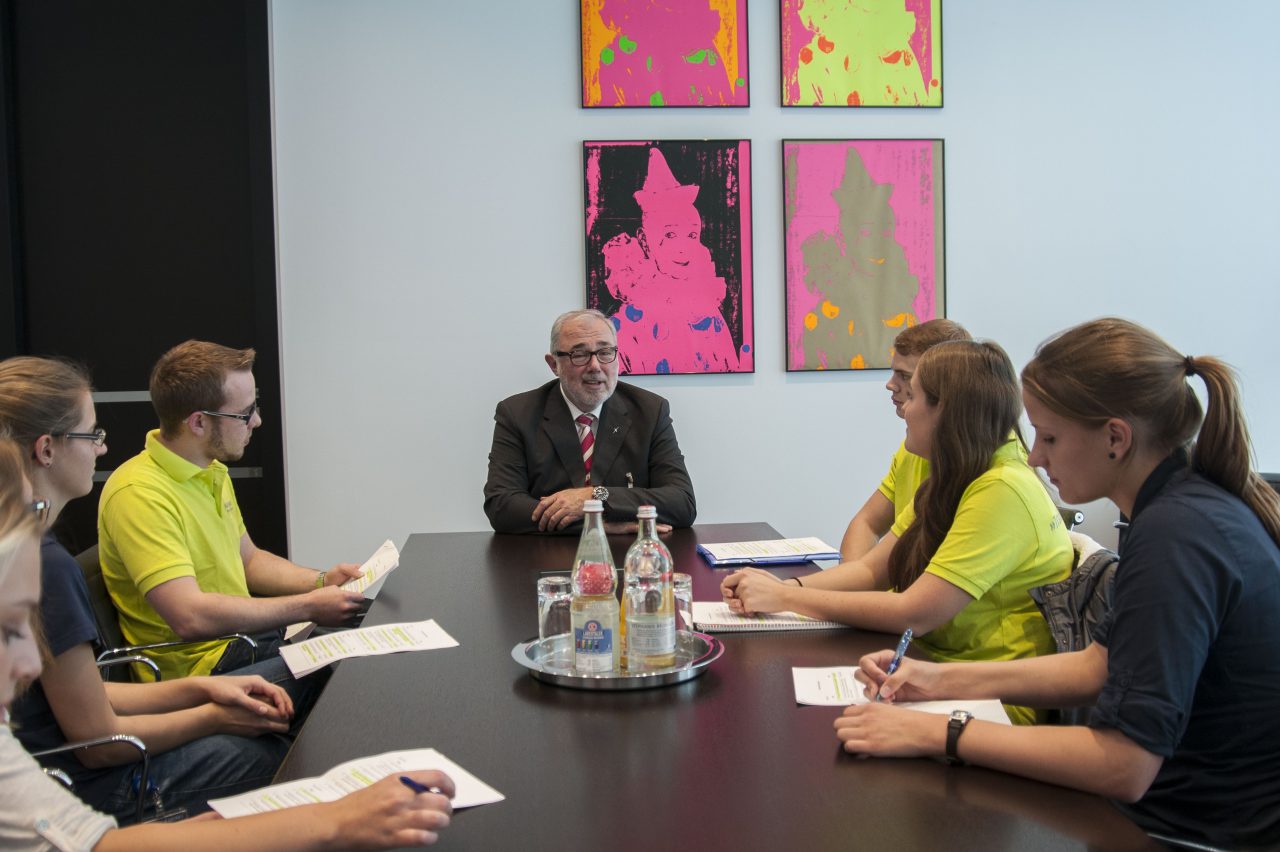 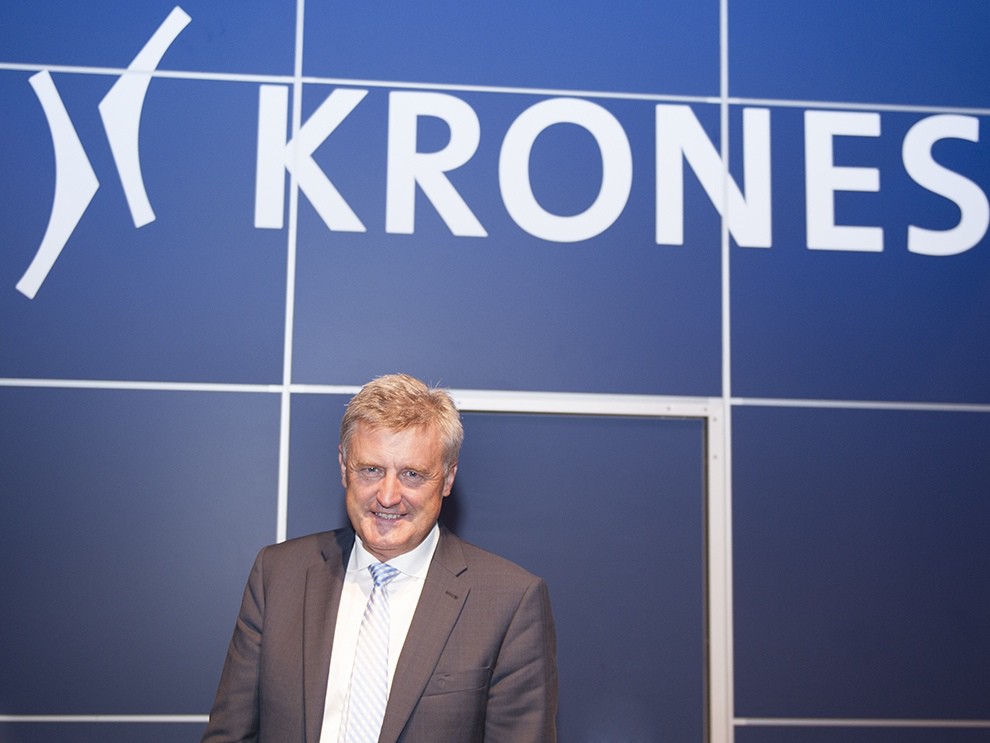 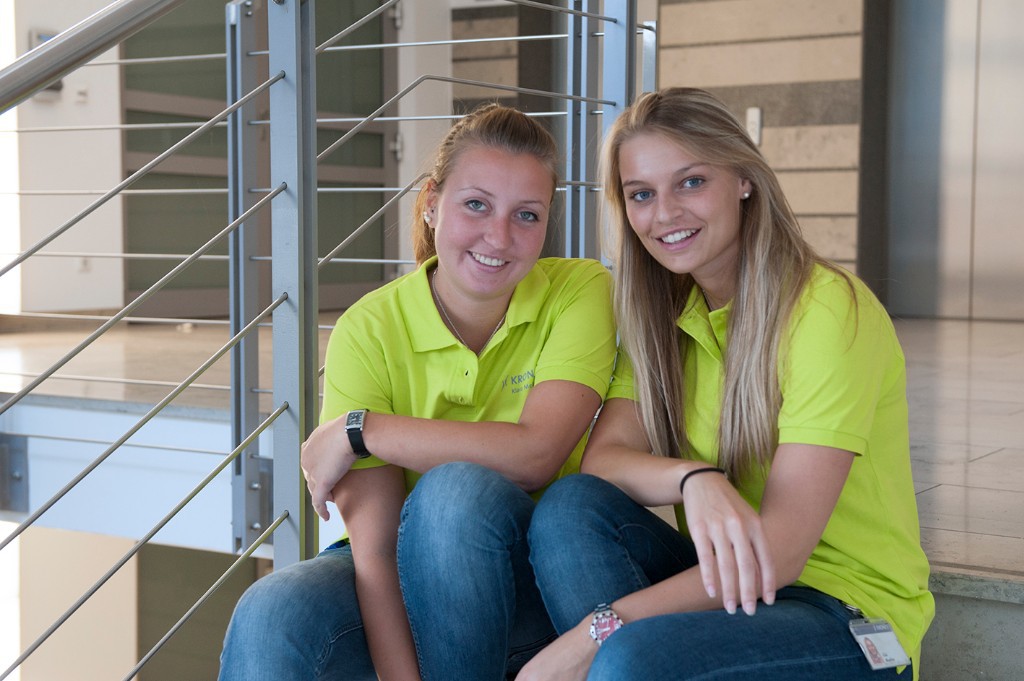 Trainee at fair Sales Team: Fit for the fair – Lisa and Klara get cracking