She’s made a reputation for herself in next to no time already. As the first and so far only female Krones service technician in Africa. Thandeka Masina from South Africa, only 25 years old. She recently spent four weeks at group headquarters in Neutraubling for service basic training.

Since June 2013, Thandeka has been employed as a service technician at Krones South Africa. And her enthusiasm has not waned one tiny little bit: “I love waking up every morning and knowing that I’m part of the big Krones family!” And how exactly did this come about? She had been interested in technology every since she was a kid. Even after that, engineering was always going to be her first-choice subject, meaning technical high school, followed by a degree course in the same subject in South Africa. And it was more by chance than design that she then hit upon Krones; to be more precise it was an encounter with Deon Du Plessis, an Academy trainer at South Africa. It was he who took the initiative and set things in motion, encouraging her to apply for a job with Krones. And she got it straight away!

Early in 2014, Thandeka’s career trajectory took her to Neutraubling, where she went through service basic training, and the best thing about it is this: she has an option to return for some advanced training. An opportunity the 25-year-old will be only too eager to take, since she really likes it at Krones AG’s headquarters: “In Africa, you only see the finished article, whereas in Neutraubling, you can see the enormous amount of hard work that goes into developing and manufacturing each and every component. It’s very impressive!”

There were more than a few reasons for astonishment. Driving in Germany, particularly, took a lot of getting used to at first. This is because whereas here we drive on the right side of the road, in South Africa they drive on the left, of course. The change-over ultimately took quite a bit of time, but actually driving as such was not all that attractive, because “What I particularly like is that here so many people use a bicycle”, says Thandeka. Back home in Johannesburg, South Africa, everyone travels by car. Unfortunately, since  “often there aren’t any cycle tracks at all”, says the 25-year-old regretfully. Which is why Thandeka thoroughly enjoys cycling here whenever she can.

She’s also going to miss the typical Bavarian food. She’s particularly fond of liver meat loaf. Not served the traditional way, mind you, but with curry sauce. “My colleagues keep telling me I should preferably eat meatloaf with mustard”, she laughs knowingly.

In the end, there were a host of new impressions and experiences to take back with her. Back home, she’s definitely going to have plenty to tell her friends, her family and her colleagues at work  … 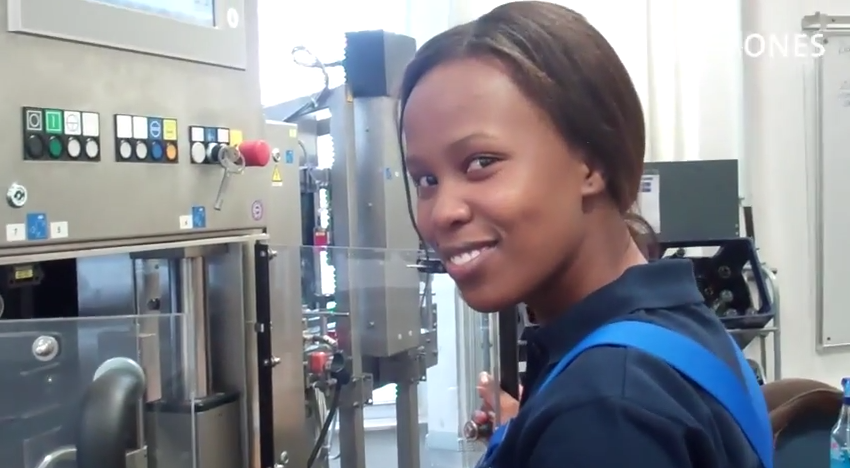