You regularly say farewell to it, and it always happens without any fuss or ceremony: whispering a soft, subvocalised “goodbye” – and straight away you consign them to the darkness. You’re never going to see each other again: all that remains is a small note of farewell, on which is written “1 x non-returnables deposit 0.25 cents”.

But let’s start at the beginning: presumably, you and the PET bottle got acquainted in the supermarket. But have you ever thought about what the containers have already experienced before they end up in your hands? I can tell you: it’s a long journey through numerous machines, on conveyors and in trucks. 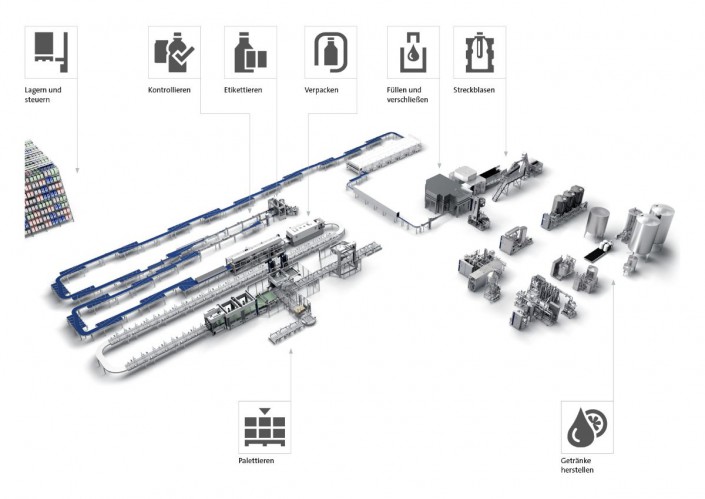 Krones and its lines above all shape the first few minutes in a PET bottle’s life – literally: in the blow-moulder, the containers are “born” and immediately downstream are passed through numerous other machines – practically like speed-dating, since sometimes the interaction lasts only a few seconds: filling, capping, labelling, inspecting, packing, palletising … – for each step, Krones offers a fit-for-purpose machine.

But not all PET lines are the same, of course. Each line is responsively matched to the product concerned and the requirements of our customers. Soft drinks or juice, hot or cold, still or sparkling – precisely because a PET line is a sophisticated omnicompetent all-rounder, it fits in perfectly with our new advertising campaign #GermanBlingBling. And if you’re now curious to see more pictures, videos and stories themed around PET bottling, then just run a search online for the #PETLine hashtag.

P.S.: You’re now probably wondering (quite rightly) what actually happens to your PET bottle after it’s disappeared into the depths of the reverse vending machine? Its journey is far from over: the supermarket delivers the compressed containers to a converter, who then recycles them. You can find out here how this process actually functions.

Up and running: Krones’ PET lines 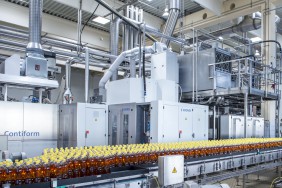 At the Austrian fruit juice and ice tea producer Pfanner, a Krones PET line has been up and running ever since 2003, and in 2011 the company decided to buy another PET line, which uses peracetic acid to sterilise the containers. Two years ago, Krones then replaced the first blow-moulder/filler block installed in 2003 by a Contiform Bloc featuring preform decontamination. Pfanner’s reasons for choosing Krones were many and varied:

“The fact that we opted for Krones once again had several different reasons. Firstly, our experience with the existing line had been good, both in terms of line dependability and the service support provided by Krones. Secondly, Krones offered a well-thought-out line configuration, and was able to   guarantee compliance with an ultra-tight time schedule. In the end, we even got the job completed one month earlier than scheduled.” 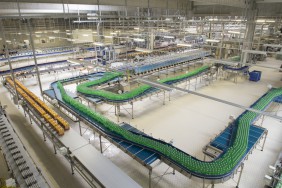 Krones was the main contractor, for both the process as a whole and for the filling technology – and did its job to the client’s satisfaction. MEG was delighted by the cooperation with Krones:

“That the commissioning of an entire factory proceeded as smoothly as this is attributable not least to perfect interaction of all the internal and external parties involved. Krones definitely proved their can-do capabilities and their dependability here at this facility.”

When it came to labelling (here’s the Sleevematic labeller) and packing, too, and for the entire syrup kitchen, Suntory put its trust in Krones as the turnkey vendor. 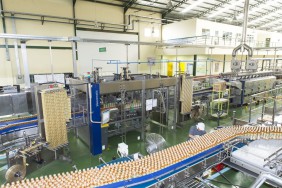 Krones pulled off a rather special balancing act at Suntory. The Japanese conglomerate wanted to produce tea and carbonated beverages – on the same line. How is this accomplished? With a combined line for both cold and hot-filling, installed by Krones in 2014. Suntory’s verdict:
“In my opinion, only Krones could achieve success here with its hybrid line. The reason for this is the ultra-sophisticated filling technology.”

This is because it’s based on an ingeniously sophisticated system: when the containers leave the Contiform H blow-moulder, they are hot at first – which is perfect for hot-filling the sensitive beverages, but an impediment when carbonated products are to be cold-filled. In this case, the empty containers are accordingly cooled before being filled in the Modulfill. 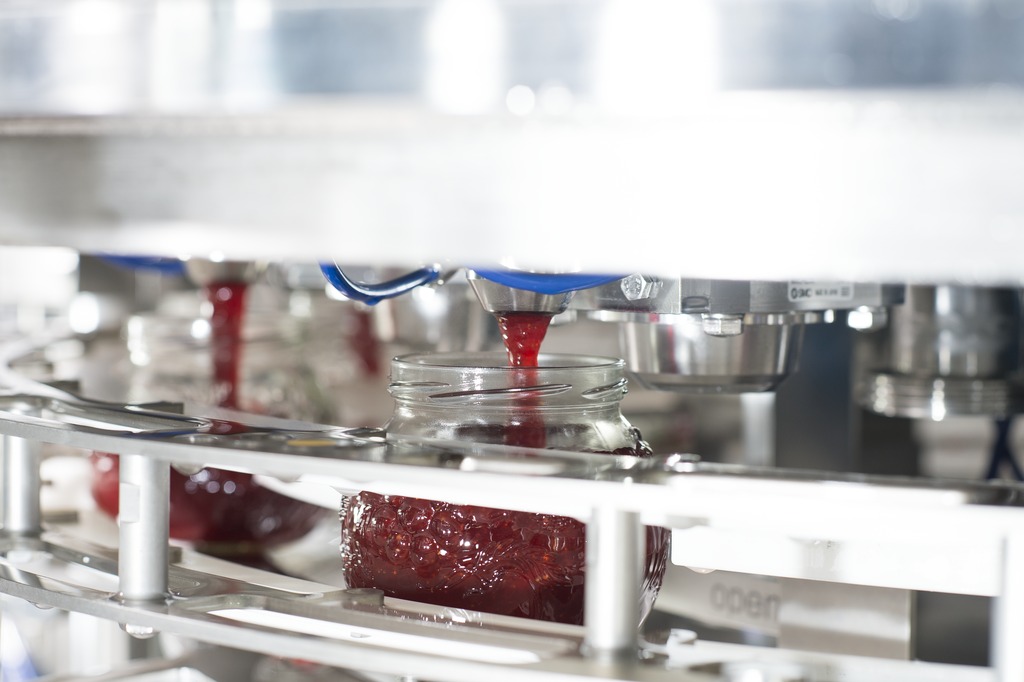 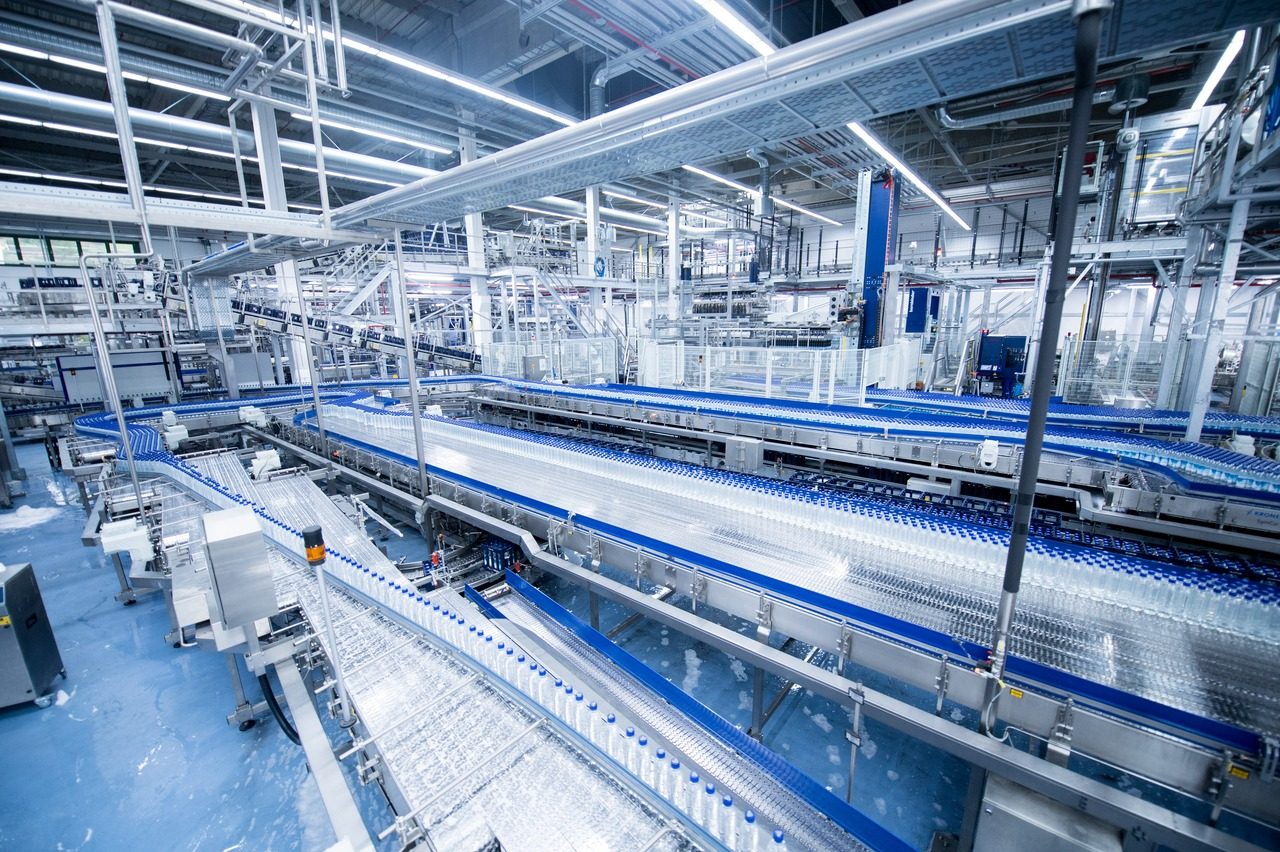 Container conveyors – the silent stars of the bottling lines