The craft brewing movement is gaining ground in Germany, though progress is slow. Innovative beer types, rising levels of interest in craft beers, new varieties of hop – how is the trend actually affecting the hop-growers? I put these questions to Dr Christoph Pinzl. He’s not only a beer sommelier, he’s also the Director of the German Hop Museum in Hallertau, the world’s biggest hop-growing region. Personally, the hop expert thinks craft brewing is for a start “extremely exciting”: “We’re no longer always getting the same, I’m almost tempted to say boring, beer. There’s a new level of diversity, in terms of both visual impact and aroma.”

“IPAs are old hat!” – craft brewing reconnects with the past

It should be noted, though, that some craft beers are not at all as innovative and new as might appear at first glance. “IPAs are actually old hat. They predate Bavarian Light Ale!” grins beer sommelier Dr Pinzl. The craft beer movement can thus be more or less comprehended as a sort of “reconnection” with the past – back to the ancient craft traditions. This also, believes Dr Pinzl, indubitably has something to do with wanting to know where the beer you’re drinking actually comes from. The brewer as the person “responsible” for the beer he makes thus plays a crucial role once more. And craft beer doesn’t necessarily have anything to do with “gourmet dining and Michelin-starred restaurants”, opines Dr Pinzl.

Not only are more different hop varieties being bred, but demand for hops is rising in general – e.g. for dry-hopped beers. If hop consumption continues to rise, however, this may definitely become problematic, fears Dr Pinzl: “In 2014, the market share of craft beer in the USA came to “only” about eight per cent – nevertheless, the craft brewers consumed around 50 per cent of all the USA’s hops.”

And craft beer’s market share in the USA is steadily rising, as can be concluded from the figures compiled by the Brewers Association. The snag here is: hops, of course, need their own sweet time to (re)grow. “This often takes two or three years!” I learn from Dr Pinzl.

Almost-forgotten hop varieties and the refinements of brewing

But new hop varieties need their time not only to grow, but to be bred as well. The breeding process and obtaining the requisite approvals used quite easily to take 15 years or more, relates Dr Pinzl. “That, of course, is not viable for craft brewing, which is why there have been changes in the past – and there will be more of them in the future. On the other hand, though, the hop farmers also need to know their crops are viable, which means a certain amount of sustainability is very important in the varieties concerned.”

I want to know which of the innumerable different hop varieties he likes best. He laughs. “I don’t have a favourite variety. I don’t have a favourite beer either. It’s the sheer diversity of choice that I like. I always decide on a gut feeling, depending on the time of year. I’m very inquisitive. But brewing is rather like cooking: what’s important is the fine-tuning, the harmony of the whole.” As someone well versed in hop history, he’s also interested in old, well-nigh-forgotten hop varieties, like the Rottenburger Hop, which had all but disappeared – and is now being grown once again. To quote an enthusiastic Dr Pinzl: “It would be exciting if more old hop varieties could be revived! Or if more old recipes were to be disinterred – as has already happened with IPA or porter.” 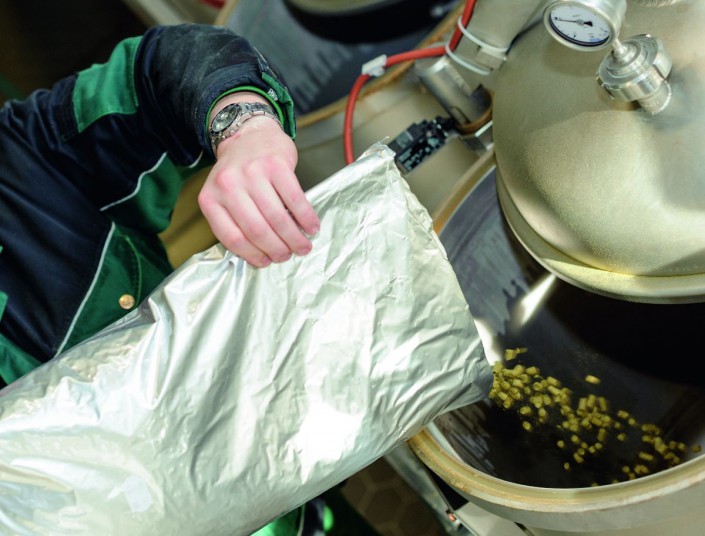 Conversely, is there a hop variety he doesn’t think much of, I ask Dr Pinzl. “I don’t know whether the “alpha obsession” by which I mean the quest to breed varieties with an increasing content of bitter substances is really a good idea in the long run. Although, of course, that’s first of all a good thing for the hop market and thus for the hop farmers! Ultimately, beer is something intuitive. It has to be harmoniously authentic,” he replies.

My final question is whether the rising level of interest in hops is also being reflected in the museum’s visitor numbers. “Not necessarily. Craft brewing is a trending issue only in a certain scene. In Germany, there are still quite a few people who have no idea what it is.” But perhaps the Germans can learn from the craft beer lovers, who (as described in the last blog post) are soon to be lured to Hallertau from abroad … And whether fans of craft brews or satisfied connoisseurs of an after-work wheat beer, “without any frills”: it would be really great if people were to stroll through the serried arrays of hops in Hallertau, so as not only to find out where their (craft) beer comes from, but also to track down the miraculous ingredient that makes this beer so distinctive: hops.