“What makes world-changers tick?” asked Sven Gábor Jánszky, Director of the trend research institute 2b Ahead Think Tank, in his presentation at the 5 o’clock theme of the drinktec. Answer: breaking the rules of their sector. Rule-breakers disrupt the established market with their unconventional ideas and approaches. Radical innovations in and changes to the classical markets are the result. He exemplified this by citing Horst Rahe, inventor of the Aida cruise liner fleet, who replaced the prevailing concept of exclusive, expensive and formal by mass appeal, cheap, fun and action, and thus became Europe’s market leader. Rule-breaking, said Sven Gábor Jánszky, is afterwards regarded as normal and beforehand as silliness. And he quoted Apple’s founder Steve Jobs, who said “If you don’t attack yourself, someone else will do it for you” as a call to ask yourself some hard questions and break your own rules.

As from 2020, what are called quantum computers will be breaking rules hitherto regarded as sacrosanct. An initial project is already up and running in Beijing, in conjunction with Volkswagen, aimed at eliminating traffic jams from the city. The computer will predict what the traffic situation will look like in 45 minutes’ time, and specify how drivers must behave in order to avoid jams. It only needs three seconds to calculate this.

Technological innovations won’t come into being because people want them to, said Sven Gábor Jánszky, but because firms drive these technologies forward. And he reminded his listeners of the iPhone’s launch only ten years ago, which completely revolutionised how we deal with media. His conclusion: people will in future put more trust in devices than in their own species. Why? The answer is: data.

Our comprehension of the term “data” is changing fundamentally. Up to 2010, static data predominated. Nowadays, it’s real-time data, und in future it’s going to be forecast data. After 2020, human emotions will be incorporated in the data collection, and after 2025 human thoughts as well. What if we could write directly from the human brain, asked Sven Gábor Jánszky. Initial approaches are already a reality.

“Digitalisation reduces complexity and that makes a lot of things more comprehensible for the individual,” said the futurologist. Every company, he added, has to ask itself how adaptive its products are. For the futurologists, adaptive signifies a combination of individualised and situationally appropriate. Adaptive foods and beverages will in the future play a major role in optimising physical health. This means functional, medicinal and energy foods and beverages, or ones that that function as beauty-enhancers. The beverage industry should take this on board at an early stage and launch suitable products on the market.

Sven Gábor Jánszky also spotlighted what he called the “European misunderstanding”: digitalisation, he pointed out, should not be equated with automation. Digitalisation, rather, means knowing precisely what products are needed in what quantities, when and at what point of sale – if at all possible also linked to the ideal sales price. Many retail companies, not least in Germany, are already operating on this principle.

With the Bottling on Demand concept study, Krones is showing at the drinktec that individualisation and rapid response to clients’ wishes are already a viable possibility. This can also be a very interesting idea in the future for health drinks or customised sports mixed beverages. So market/demand-responsive production is now present-day reality at Krones.

I would have been pleased to show Sven Gábor Jánszky how Krones breaks existing rules with this technology. But he’d already departed. 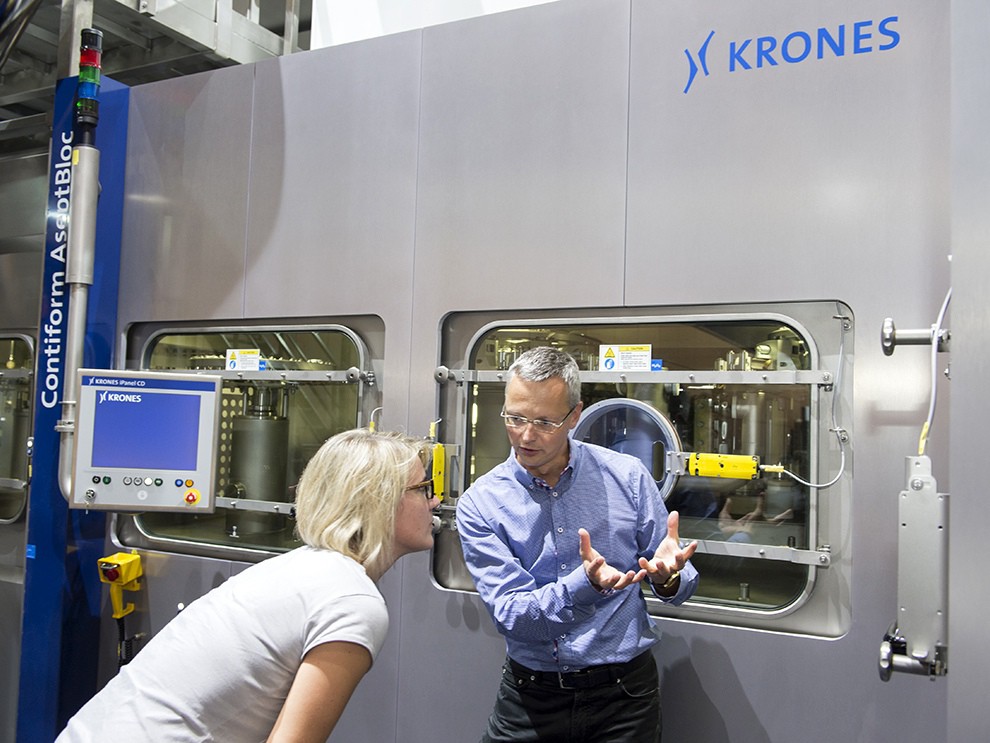 Premiere: first customer host for the SAP CIO Round Table